I know many smokers are of the belief that cigarettes provides some benefit such as pain relief or perhaps relief from depression, stress, or anxiety. They may feel that the cigarette relaxes them or puts them in a better mood and may find its effects enjoyable. I know because I was one of these people, I used to smoke and I’ve heard many other smokers say the same thing. Being an ex-smoker, my curiosity was of course peaked and I wanted to know the answers to the following questions: does smoking have any up-side, does it have any impact on fibromyalgia, are smokers more at risk because of COVID-19 and does it make fibromyalgia worse? Read on to find out.

What is in That Cigarette? 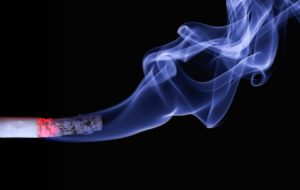 Cigarettes typically contain tobacco, a psychoactive compound to which glue and chemicals and fillers are added. The product is then sprayed with nicotine. According to Wikipedia, nicotine is a stimulant and potent parasympathomimetic alkaloid that is naturally produced in the nightshade family of plants.  Nicotine is what makes cigarettes so addictive. Although tar, carbon monoxide and nicotine make up the main components of a cigarette, they are not the only chemicals responsible for the deleterious effects associated with smoking and second hand smoke. At least 60 different chemicals found in smoke have been identified as carcinogens as well as 30 identified metals, some of which are radioactive.

There are over four thousand chemicals in one cigarette, as mentioned, many of them carcinogens. According to the American Cancer Society, smoking not only causes cancer but can damage nearly every organ in the body, including the lungs, heart, blood vessels, reproductive organs, mouth, skin, eyes, and bones. Smoking cigarettes also kills about one in five Americans, or 440,000 people a year. That is more than alcohol, car accidents, HIV, guns, and illegal drugs combined. It is also estimated that seventy percent of the 46 million Americans who smoke want to quit. Are you one of them? Perhaps you know someone who smokes and wants to butt-out for good, if so keep reading to find out how I did it.

Pain and the ‘Feel-Good’ Chemicals

Smoking stimulates nicotinic receptors in the brain and inhibits a chemical known as leptin. According to verywellhealth.com, together, this can work to deregulate the way the brain and endocrine system responds to pain. The deregulation of the balance between leptin and another chemical known as neuropeptide Y could be an important mechanism for pain in fibromyalgia.

The fact is nicotine will cause the body to release “feel good” chemicals such as dopamine which is why it is so addictive. Unfortunately, this sensation is only temporary and may actually worsen your pain over time. According to the Cleveland Clinic, tobacco smoke also impairs the delivery of oxygen rich blood to bones and tissue. Decreasing blood and nutrient flow can cause degeneration, particularly in the disks and spine, resulting in lower back pain and sometimes osteoporosis. As a result, smokers are approximately 3 times more likely to suffer from back pain as well as increased pain and sensitivity in general.

What is the Research Telling Us?

A 2015 study published in the National Center for Biotechnology Information found that those who had fibromyalgia and smoked reported higher pain levels than the fibromyalgia patients who did not smoke. A 2009 study in the Mayo Clinic also concluded that tobacco use in people with fibromyalgia was linked to greater pain intensity, higher scores on the Fibromyalgia Impact Questionnaire, more sick days from work and fewer good days overall. A 2002 study discovered a significantly positive relationship between smoking and pain, patient global severity, functional disability, and numbness.

According to an another study by Ryan D’Souza, M.D., from the Mayo Clinic, 668 patients with fibromyalgia were surveyed in order to examine the correlation between tobacco smoking and cognitive function. Researchers found that approximately 14 percent of the patients self-identified as smokers. In unadjusted analysis, smoking was identified as a significant risk factor for lower total cognitive functional scores and lower MASQ subscale scores in language, attention, verbal memory and visual-spatial memory.

I am not here to make life more unbearable for you; it can be difficult to get through a pandemic, so it is understandable that for some, the idea of going through such a trial without a cigarette can be incredibly stressful. As a former smoker, I get it. It is times like these that make us seem to want to smoke more, but if there was ever an ideal time to quit, this would be it. The World Health Organization recommends people quit smoking as it makes them more vulnerable to COVID-19 infection. Immunosuppressed people are at higher risk if they get COVID-19, and cigarettes are an immunosuppressant.

The Centre for Evidence-Based Medicine at the University of Oxford reports that there may be several reasons to account for the higher death rates that have been taking place in Italy, one of them being smoking. 24 percent smoke in Italy, compared to an estimated 14 percent of adults in the U.S. When it to comes to germs, cigarettes may also make smokers more vulnerable because they are bringing their hands to their mouths and face more often. Furthermore, on the topic of transmitting germs, be sure not to smoke someone else’s cigarette.

According to the CDC, smoking can cause lung disease by damaging your airways and the small air sacs (alveoli) found in your lungs. Lung diseases caused by smoking include COPD, which includes emphysema and chronic bronchitis. According to the Lung Association, lung health professionals are also warning about the dangers of pipes. The use of cold water in the water pipes can facilitate the survival of bacteria and/or viruses. On their website, it states that

“While information regarding susceptibility of those who smoke to contracting COVID-19 is still forthcoming, we do know that those who smoke are two to four times more likely to contract bacterial and/or viral infections. Among Chinese patients who contracted COVID-19 and have a history of smoking, the odds of disease progression or death were found to be 14 times higher. While we do not know yet what affect vaping may have, it has dangers in general and we strongly urge those who smoke, vape or use water pipes to quit.”

This post is not long enough to go into too much detail, nor did I list every study I found, I have however, been able to locate a significant amount of information supporting the theory that smoking can in fact make fibromyalgia worse. Fibromyalgia is an inflammation disorder and tobacco causes widespread inflammation and can eventually worsen pain intensity, increase fatigue, and even negatively affect one’s memory. Any of the perceived stress reduction and relaxation ‘benefits’ associated with the endorphins that are released while smoking are not worth the myriad health concerns cigarettes cause. Furthermore, other activities such as regular exercise will release these same ‘feel good’ chemicals in the body and are far healthier than smoking. It is also important to consider quitting because of the dangers of COVID-19 but also because of your overall health and the people who love you.

How can I Quit? 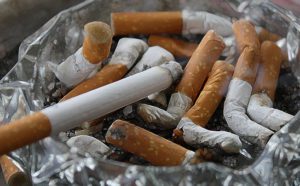 If you are ready to quit, but you are not sure that you can do it alone, there is help available. Nicotine is highly addictive and although it is possible to quit ‘cold turkey,’ it can be extremely difficult for some. The good news is that there are many options out there. After speaking with your doctor, he or she may prescribe a prescription drug to help you quit smoking. There are some drugs, such as an anti-depressant that has an ‘off label’ use as a smoking cessation drug  as well as drugs that were specifically developed for smoking cessation. Every drug comes with side effects, of course but most doctors agree that in the majority of cases, the risk of continuing to smoke outweighs the side effects from medication.

There are many over the counter products out there on the market today that are designed to help you quit that contain nicotine, called Nicotine Replacement Therapy (NRT) they gradually lower the amount of nicotine your body inhales, absorbs or consumes until you stop completely. Your essentially weening yourself off of nicotine slowly. Some examples of NRT products include nicotine lozenges, Nicorette spray, inhalers and Gum and nicotine patches such as NicoDerm CQ. These and other similar products have helped many people quit but be aware however, that the patches have been know to cause side effects including nausea and there is always the possibility, however slim, of becoming addicted to Nicorette gum or other nicotine containing products.

There are also products on the market that may help you quit smoking without the use of nicotine such as herbal, tobacco free cigarettes or inhalers like the QuitGo Nicotine Free oxygen Inhaler or the Harmless Cigarette. I have not personally tried these products, but I’ve heard some great feedback. The website for Harmless Cigarette states that it is “a therapeutic habit replacement which replicates similar features of a real cigarette combined with scent and aroma that helps satisfy cravings and overcome the urge to smoke naturally without the harmful effects of tobacco, vaping and/or using nicotine products.” 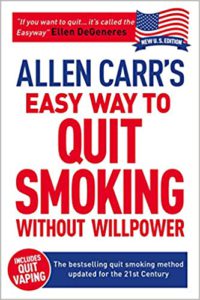 You may also want to try Allen Carr’s book Easy way to stop smoking, which has been recently  updated and includes information on how to quit vaping. Allen Carr’s Easyway has helped 30 million people in over 50 countries to be free from smoking, vaping, drinking, drugs, as well as other addictions. Allen Carr’s inexpensive, safe, non-willpower method is what helped me quit smoking over 10 years ago, and I’ve never looked back since. I had tried many things over the years but this was the only method that worked for me and I highly recommend it. I know that if I can do it, so can you!

If you live in Canada, you may call the Smoker’s Helpline at 1-877-513-5333 for assistance or you can visit their website at smokershelpline.ca. If you reside in the US, visit smokefree.gov.  Remember, there is no better time to quit than the present! I hope you have enjoyed this post and have found it informative. Stay healthy and safe, especially when you venture out. As always, let me know if you have any questions in the comment section below. Let me know if you want to quit smoking for good and if you have, what has worked for you. Thank you for stopping by and take care.

2 thoughts on “Can smoking make fibromyalgia worse? How I Quit for Good!”